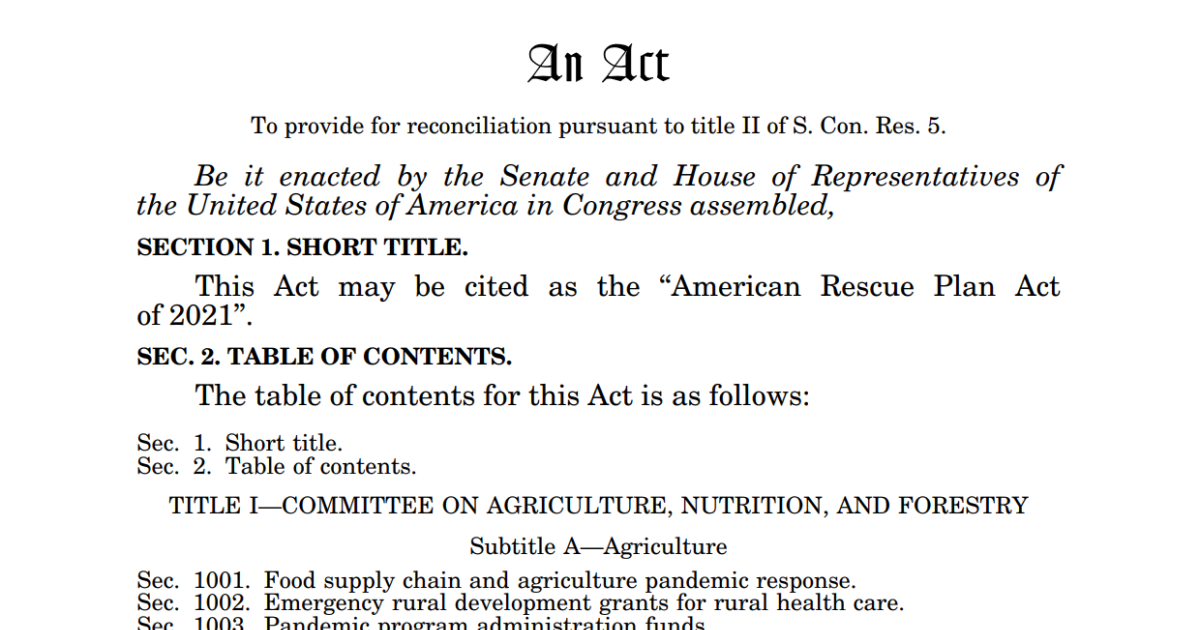 $300 million for animal surveillance for COVID

No less than $50 million to buy land for these groups

$390 million to modernize the WIC program

Total so far from all three relief bill is $319 million. Howard's endowment is over $650 million

Total from all three relief bills for each: $377.5 million

$200 million for the Institute of Museum and Library Services

$200 million for OSHA, MSHA, and other occupational regulation agencies

$852 million for the Corporation for National and Community Service

$750 million for global health funding (outside of the US).

Typically this funding is attached to the Helms Amendment, which prohibits funds from being used for abortions abroad. No such restrictions included in this bill.

Typically this funding is attached to the Hyde Amendment, which prohibits taxpayer funds for abortion. No such restrictions were included in this bill.

Planned Parenthood withdrew from this program after the Trump administration enacted anti-abortion requirements, but has announced they're rejoining now that the Biden administration has removed them.

With $30 million for administrative costs

$1 billion set aside for an incentive program that "under which the Secretary shall increase the second 1⁄3 and last 1⁄3 allocations for States that demonstrate robust support, as determined by the Secretary, for business concerns owned and controlled by socially and economically disadvantaged individuals in the deployment of prior allocation amounts"

For the purposes of:

Reimbursement for payroll of public transportation

Paid administrative leave of operations or contractor personnel due to reductions in service.

$77 million for the Government Accountability Office

Almost $13 million to sanitize one building.

$650 million for Cybersecurity And Infrastructure Security

$1 billion for the Technology Modernization Fund

Additional $75 million for a multi-lingual call center for relief program info, and an ad campaign

"The EAA program provides a wide range of technical, planning, and public works and infrastructure assistance in regions experiencing adverse economic changes that may occur suddenly or over time".

"$50,000,000 shall be for grants, contracts, and other agency activities that identify and address disproportionate environmental or public health harms and risks in minority populations or low-income populations"

$105 million for the US Fish and Wildlife Service

$8 billion in relief for airports

Additional $1 billion for contractors, and $10 million for administrative costs

To protect people from catching COVID from consumer goods.

$7.2 billion for an Emergency Connectivity Fund

$175 million for the Corporation for Public Broadcasting

$350 billion to bail out state and local governments

$219.8 billion for state and tribal governments

$130.2 billion to bail out city/local governments

$2 billion for the Local Assistance and Tribal Consistency Fund

$204 million for the Department of State

$500 million for Migration and Refugee Assistance

$900 million for the Bureau of Indian Affairs