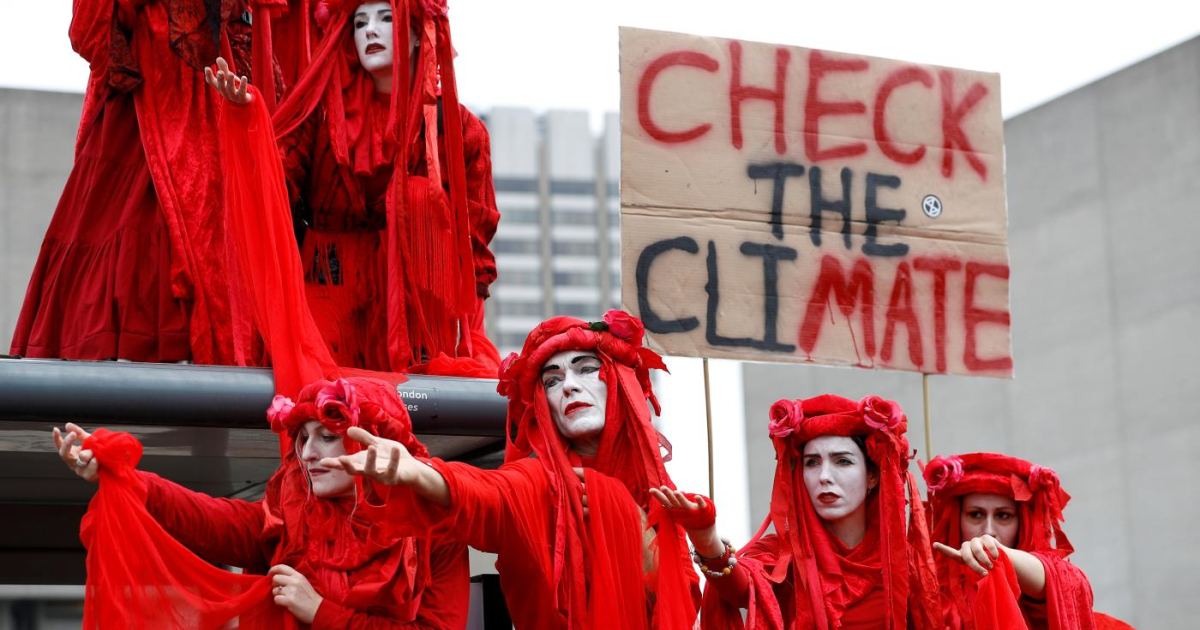 Climate Change and the Ten Warning Signs for Cults

Have you thought to yourself that the Climate Change movement seems more and more like a religious movement?

I have, so I researched how to identify a religious cult. Rick Ross, an expert on cults and intervention specialist, developed a list of ten warning signs for unsafe groups, which is published by the Cult Education Institute. So let’s take a look at all ten signs and compare:

The leading advocates of the Climate Change movement are politicians, entertainers, and even children. Climate preachers such as Al Gore and Leonardo DiCaprio lack any formal scientific training whatsoever, and live personal lives of unparalleled luxury while prescribing carbon austerity for the masses. Yet no one is permitted to point out their scientific ignorance or call attention to their hypocritical lifestyles.

Child advocates such as Greta Thuneberg and the crudely indoctrinated children of the “Sunrise movement” are essentially sock puppets for their shameless activist handlers. Refuse to bend the knee to these tiny fascists, as Diane Feinstein most recently did, and the mainstream left will relentlessly attack you as an accessory to mass murder.

The authority of Climate Change leaders is entirely unmerited and absolute, yet no one is permitted to hold them accountable for their ignorance, inexperience, or brazen lies. Thus, the Climate Change movement clearly meets the first warning sign for unsafe groups.

2. No tolerance for questions or critical inquiry.

The conclusions of the Climate Change movement may not be challenged or questioned under any circumstances. Those who dare scrutinize the conclusions, methodology, or prescriptions of “climate scientists” are categorically dismissed as a “Climate Denier”, an excommunicated untouchable whose opinion is no longer valid on any subject.

Questions and critical inquiry aren’t merely dismissed or refuted. The unfortunate heretic immediately experiences a relentless ad hominem onslaught of scorn and hatred from the political and media left, and is often subjected to accusations of outright murder. Simply question the effectiveness of a “carbon tax” and you may find yourself tied to a stake.

There is no tolerance for questioning the Climate Change movement, and thus it clearly meets the second warning sign for unsafe groups.

3. No meaningful financial disclosure regarding budget, expenses such as an independently audited financial statement.

Hardly anyone knows just how much money is spent on “Climate research” every year. The cost is spread out among laughably useless study grants, wind and solar farm subsidies, carbon offset credits, “green” building code evaluation and enforcement, salaries for bureaucrats solely dedicated to “climate concerns”……you get the idea, it’s a lot of hazy money.

The abhorrent practice of “sue and settle” was a flat out money laundering scheme that allowed sympathetic government officials to transfer millions of tax dollars to radical leftist environmental groups. The practice only ended when the Trump administration used executive power to clamp down on it.

4. Unreasonable fear about the outside world, such as impending catastrophe, evil conspiracies and persecutions.

This one is pretty obvious. The Climate Change movement always shouts out revised and updated apocalypse predictions, eerily reminiscent of the stereotypical bum on the sidewalk with that “The End Is Near” sign. “The world will end in X years if we don’t do X” is the constant refrain. The years always pass, and the apocalypse never happens. Interestingly, this is a characteristic of multiple religious cults (such as the Seekers of Chicago, and the Order of the Solar Temple). At the moment, we apparently have 12 years to nationalize the entire economy and phase out fossil fuels before we all die a fiery death.

There’s also no shortage of conspiracy theories about who they consider to be Earth’s greatest saboteurs. They have an enemies list. The fossil fuel industry is at the top of it, with widespread tinfoil hat theories about oil companies burying patents for efficient renewable fuel recipes to keep us all guzzling gasoline.

The “repent or burn” doomsday preaching is the most well-known staple of the Climate Change movement, and quite clearly exemplifies the fourth warning sign for unsafe groups.

5. There is no legitimate reason to leave, former followers are always wrong in leaving, negative or even evil.

Climate alarmists who leave, step back from, or even lightly criticize the movement are immediately subjected to vicious smear campaigns. Dutch professor Richard Tol experienced this phenomenon firsthand when he removed his name from an IPCC climate report and criticized the reports excessively apocalyptic predictions.

The smear campaign was led by Bob Ward, director of policy at the London School of Economics’ Grantham Research Institute on Climate Change ‘This has all the characteristics of a smear campaign”, Tol said. “It’s all about taking away my credibility as an expert.”

The treatment of Professor Tol is not uncommon, and clearly demonstrates that the Climate Change movement exhibits the fifth warning sign for unsafe groups.

6. Former members often relate the same stories of abuse and reflect a similar pattern of grievances.

Professor Tol is not an anomaly. Dr. Richard Lindzen of MIT, Dr. Nils-Axel Mörner, and countless other former IPCC in-crowd climate experts were subjected to smear campaigns from their colleagues and the news media for the crime of throwing cold water on the outlandish predictions of the Climate Change movement.

This pattern is all too familiar to anyone who has studied what happens to individuals who leave the Church of Scientology, and clearly meets the sixth warning sign for unsafe groups.

7. There are records, books, news articles, or television programs that document the abuses of the group/leader.

The abuses of the Climate Change movement are loud and proud. They vociferously attack their perceived enemies for public consumption, and are cheered on by fellow travelers in the journalism class. Most recently they brainwashed a bunch of kids and marched them into an octogenarian Democrat Senator’s office to beg not to be murdered by a ‘No’ vote on impossible legislation. Have you seen those kids in Diane Feinstein’s office? You should, it’s creepy.

8. Followers feel they can never be “good enough”.

The atonement process for Climate warriors always demands more. It started with using a recycling bin and grocery bags. Now, in 2019, being a good follower means imposing veganism on the masses and issuing fatwahs against innocuous objects such as plastic straws and grocery bags. Despite all the efforts of the faithful, Climate minions maintain a constant state of dread and despair, knowing they can never truly do enough to stop the coming doom.

9. The group/leader is always right.

When have the climate leaders been called wrong for their failed predictions? Regardless of the weather, they are always intrinsically correct.

See how this works?

One of the best aspects of the movement is “weather is climate until it isn’t”. The acolytes of Climate Change will point out the window in a heat wave and say, “See? We’re right!”

If a skeptic points out the window during a blizzard, the same acolytes will simply cry “Weather isn’t climate!” It’s a game they can never lose, one in which they are never wrong and always right.

10. The group/leader is the exclusive means of knowing “truth” or receiving validation, no other process of discovery is really acceptable or credible.

The path to discovery for the Climate Change movement is an intentionally vague discipline referred to as “climate science”.

Did you carry out a study on gender and glaciers? Climate Science.

Did you think up the worst possible scenarios that have no actual chance of happening (actual portion of latest National Climate Assessment)? Climate Science.

Any “science” that confirms the tenets of the Climate Change movement is deemed “climate science”, while actual scientific research that disputes their conclusions is derided as “denialism”.

The tenth warning sign for unsafe groups is clearly met.

The Verdict: It’s a cult

According to the established, scientific guidelines developed by cult experts, the Climate Change movement fits the bill for a potentially unsafe group.

When I looked up these established warning signs, I honestly expected Climate Changeists to meet two or three of them, NOT TEN! The disturbingly religious nature of this supposedly “scientific” movement should alarm any thinking human being, especially since the movement now openly seeks to nationalize the entire economy.

It’s time for conservatives to realize what they are dealing with, and act accordingly. Rather than debating Climate Change activists, it may be time to start staging interventions.

If someone you know is a member of the Climate Change Movement, and you are interested in intervention strategies, please visit https://culteducation.com/prep_faq.html.